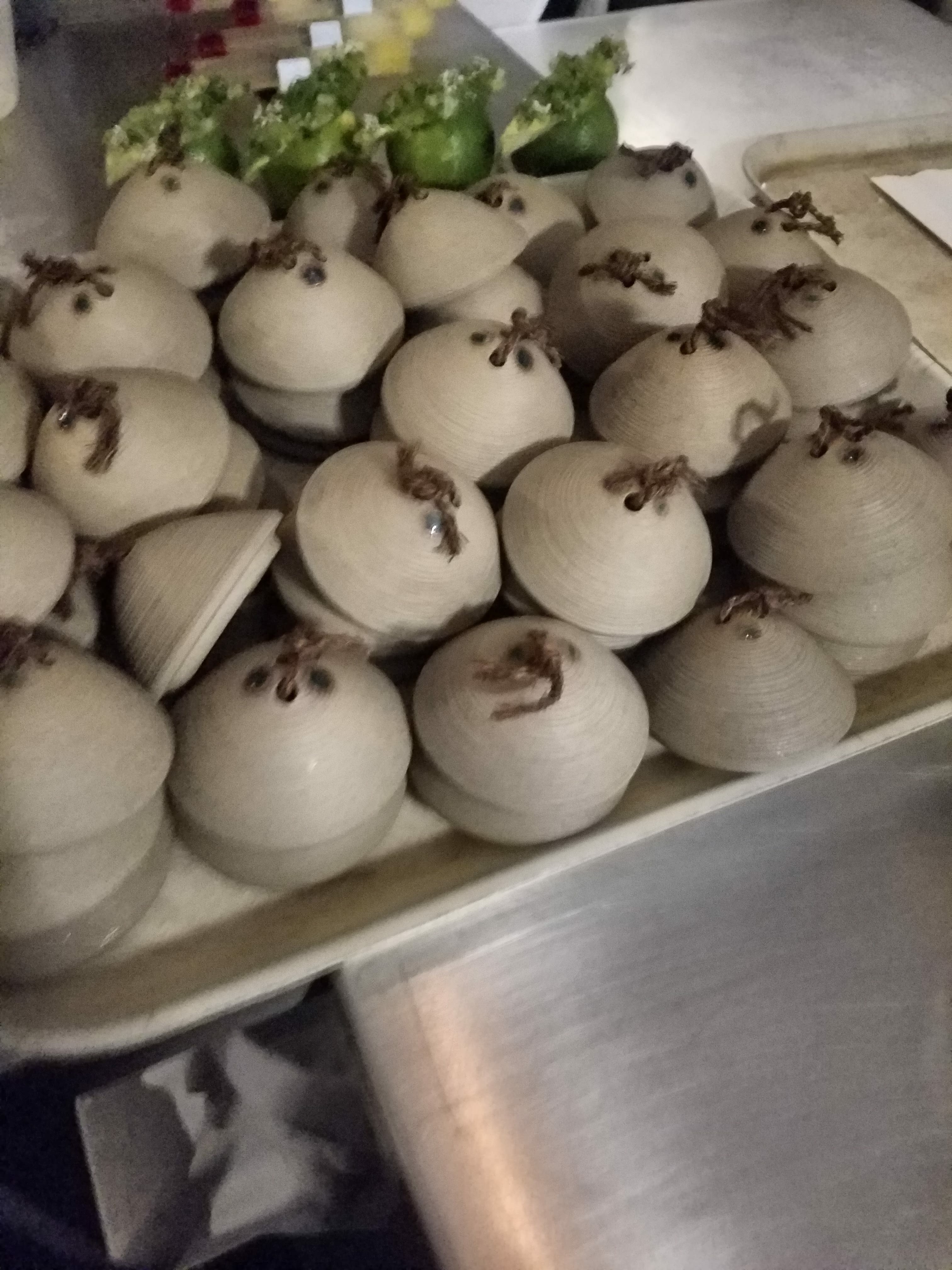 This was my first Michelin 3-star restaurant and after the experience I know it won’t be my last. If you don’t want food spoilers then you can go to my yelp review here, but if you want all the details keep reading.

The lighting was a little dim so the pictures might not be the best quality but I thoroughly enjoyed every dish. I like that they are accommodating to all dietary restrictions since I asked for a dairy-free and meat free experience and it was equally as phenomenal as the experience my friends had.

The menu is not given to us outright it is on a cardstock with a word search on it. 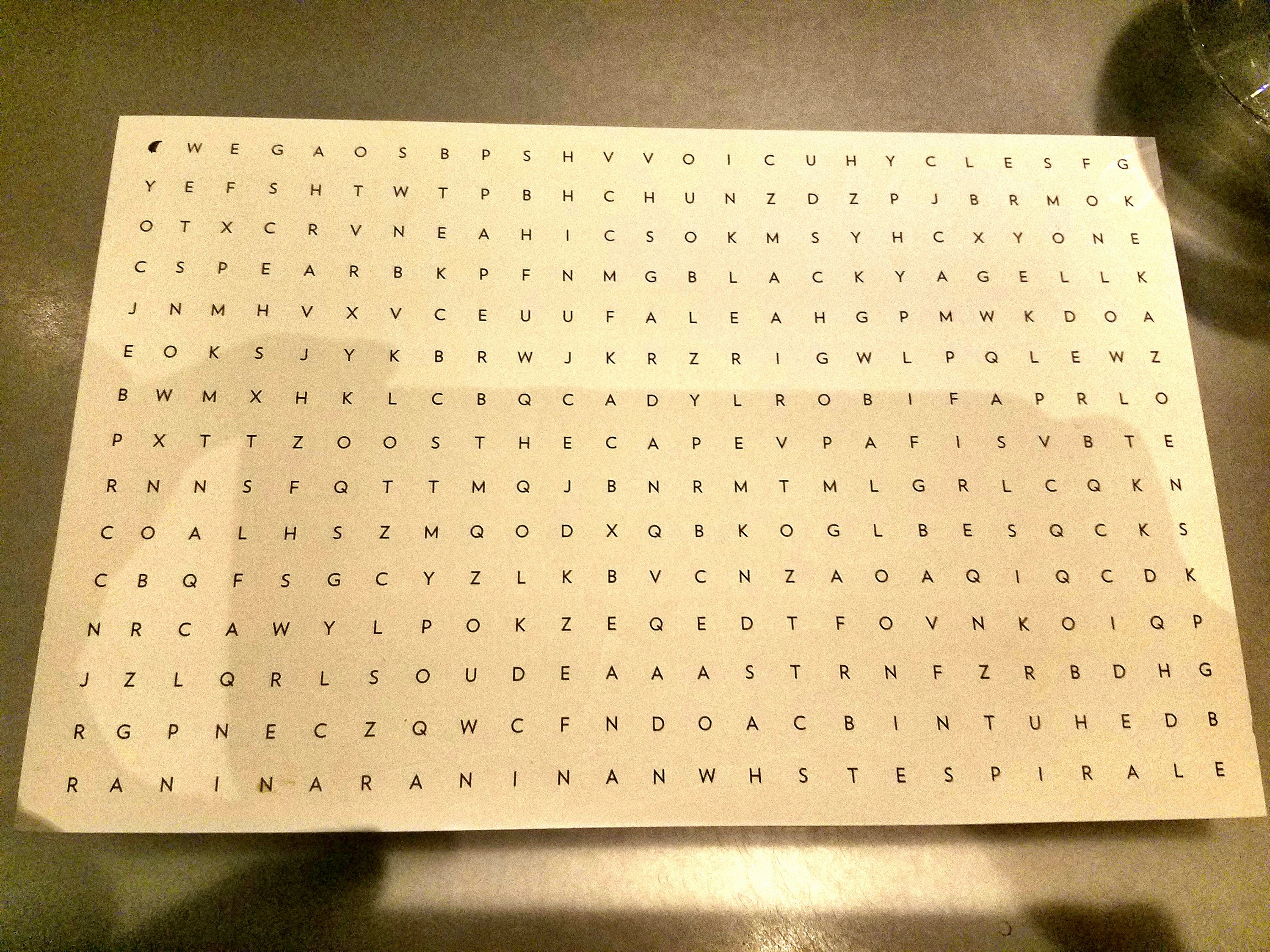 That word search had some weird words like “spear” or “black” or “glow” that I couldn’t quite understand until the dish got to me and sometimes even so I did not understand, nonetheless it was a treat to enjoy the surprises of the night.

We started with a snowy caviar on top of some delicious pears marinated in some Japanese inspired citrus juices. Alongside the small clay pot was a lime with a spear of lettuce topped with some citrus, jalapeno, avocado stuff. Either way it was lovely. There was a depth of flavor and almost plum-like. 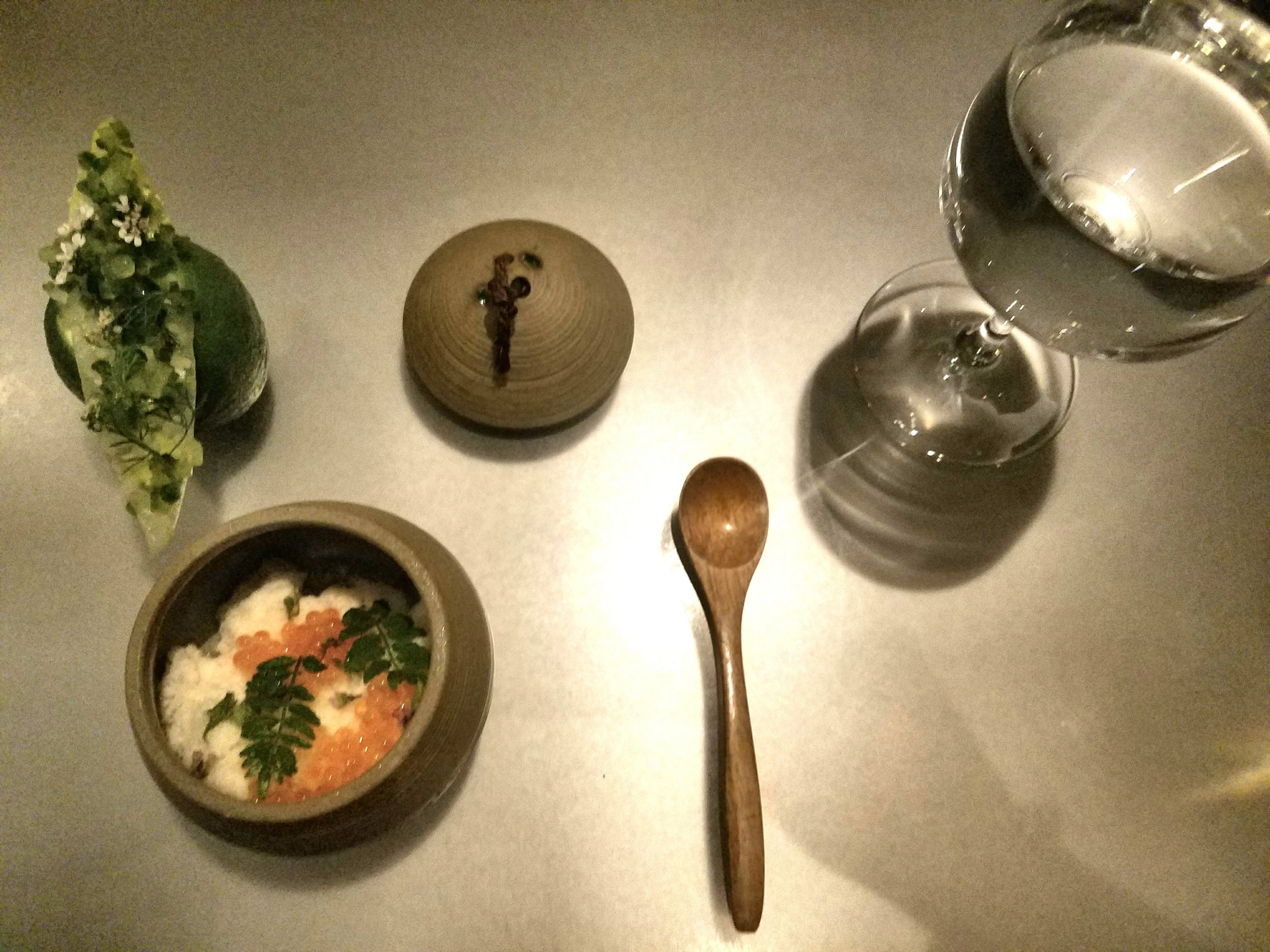 The water was also something special and pure. Some semolier might be able to tell the difference in their description but I felt it was crisp, clean and almost icy.

There is a significant amount of time between dishes but they entertain you with interesting sights, sounds and smells. The first center piece had some tangerines and dry ice and they poured some essence into it making the carbon dioxide fog and smell wonderful. 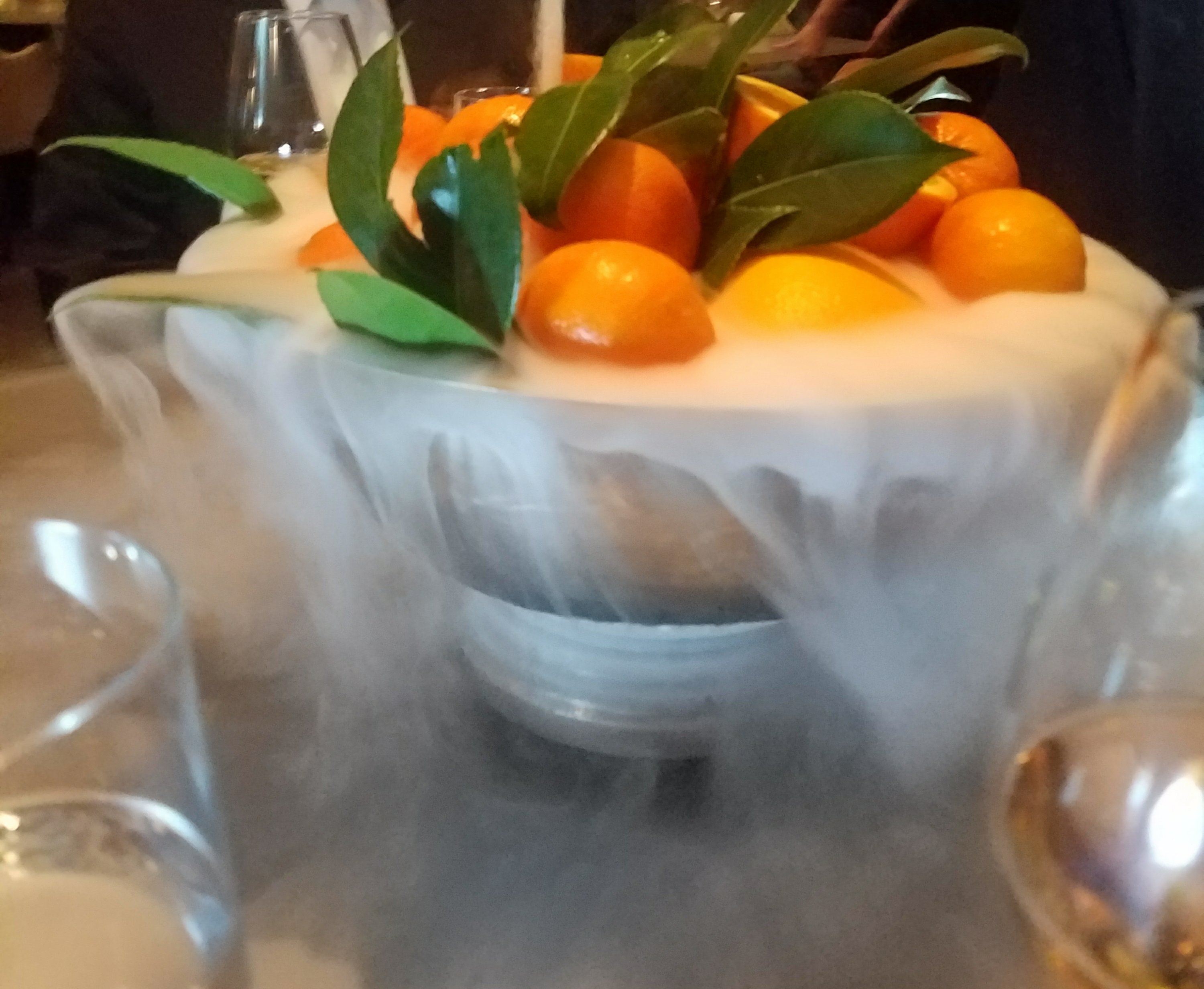 The next “dish” was a small orange marble looking thing atop a glowing bed of snow. It was a sweet and citrus tasting palette cleanser that almost reminded me of an adult fruit gusher. It has more refined taste than a gusher but the same liquid insides as one. 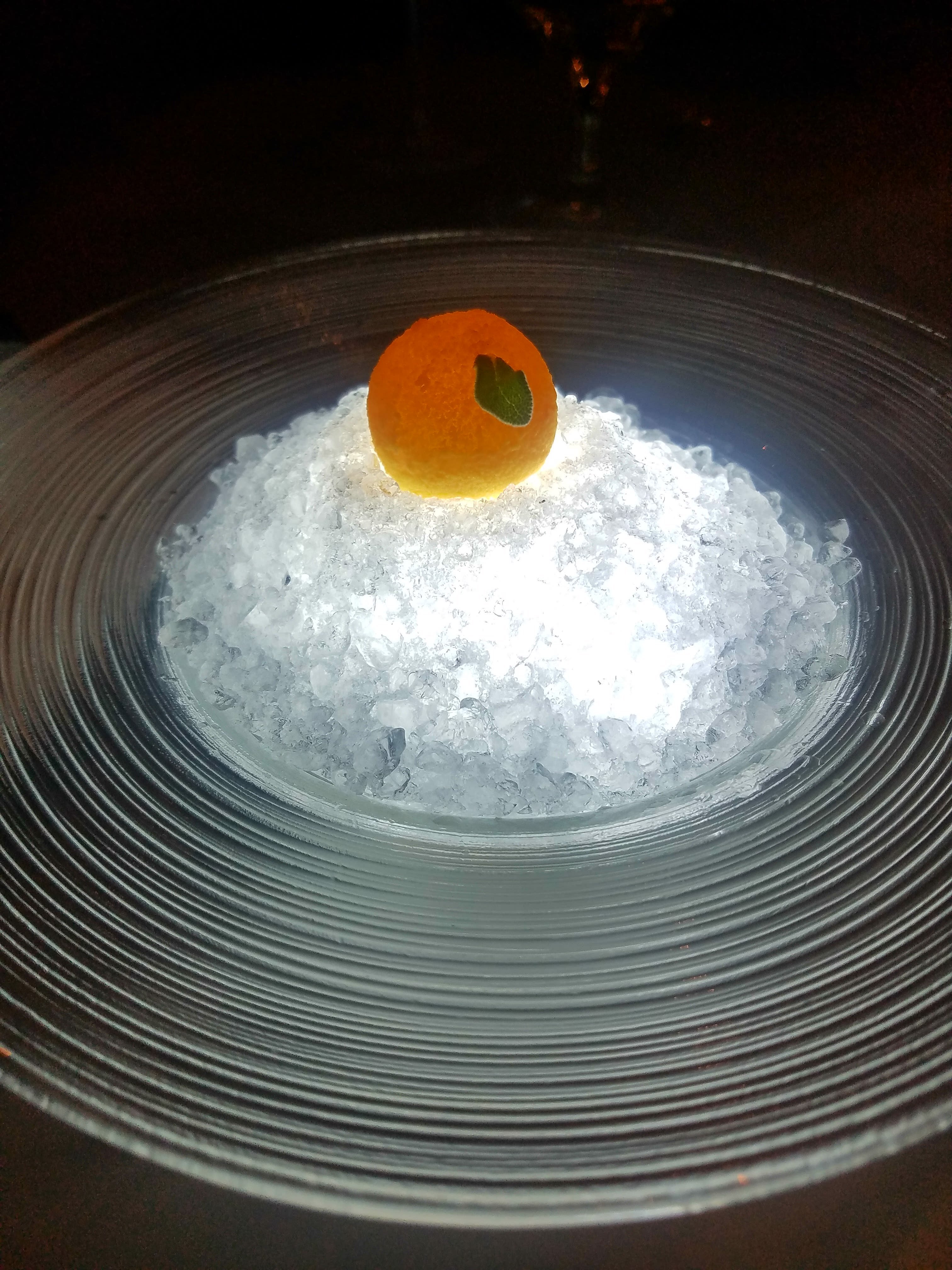 Served alongside it was a mango curry dish with some sort of fish. The fish was flakey and the dish was almost creamy from the forbidden rice element added to it. The crisp spinach was like a buttery chip but in vegetable form. There were flowers on top that were sweet and refreshing. 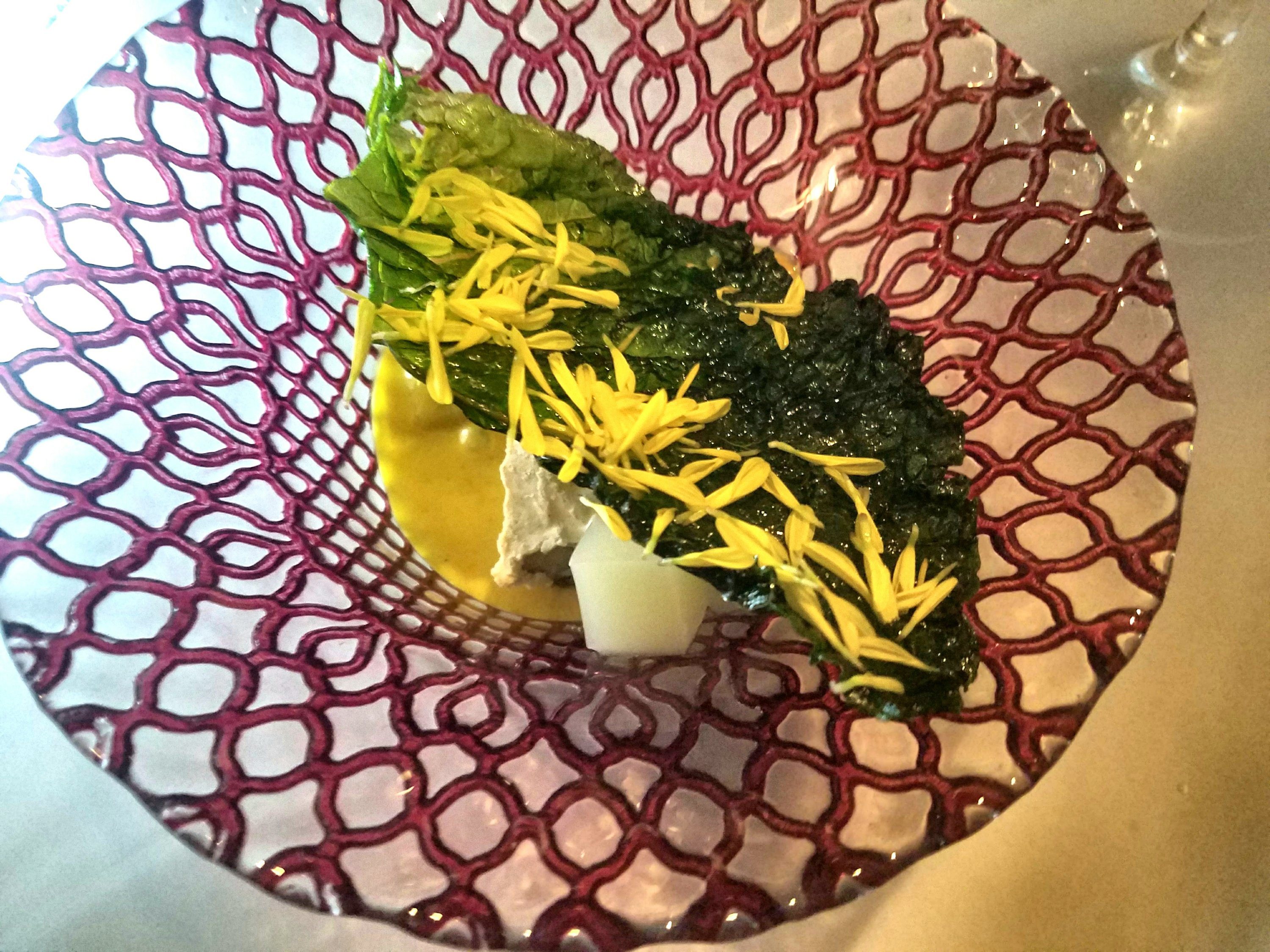 The centerpiece was then changed to this flaming bowl of sand. Enough said. 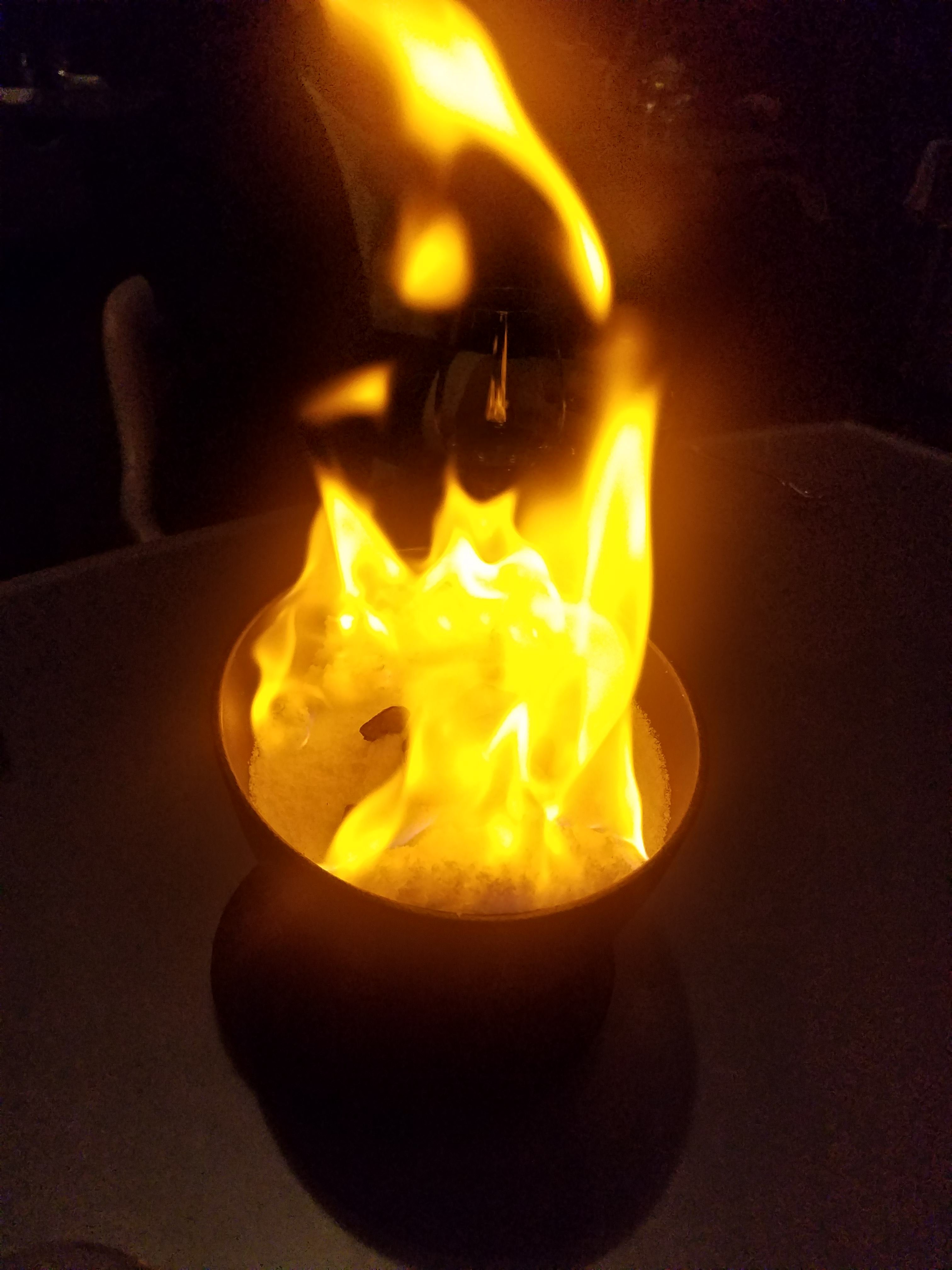 We were then served a black olive like thing atop a bed of black stones. I always felt so special since they would tell me mine was different due to the lack of dairy. I felt that it tasted better than the ones my friends had gotten because of how well the wait staff treated and probably also because it was so delicious.

They also placed a black plate with a sole calamari and some squid ink sauce next to it. I remember the taste as tangy and rich. The texture was just right and not too chewy. 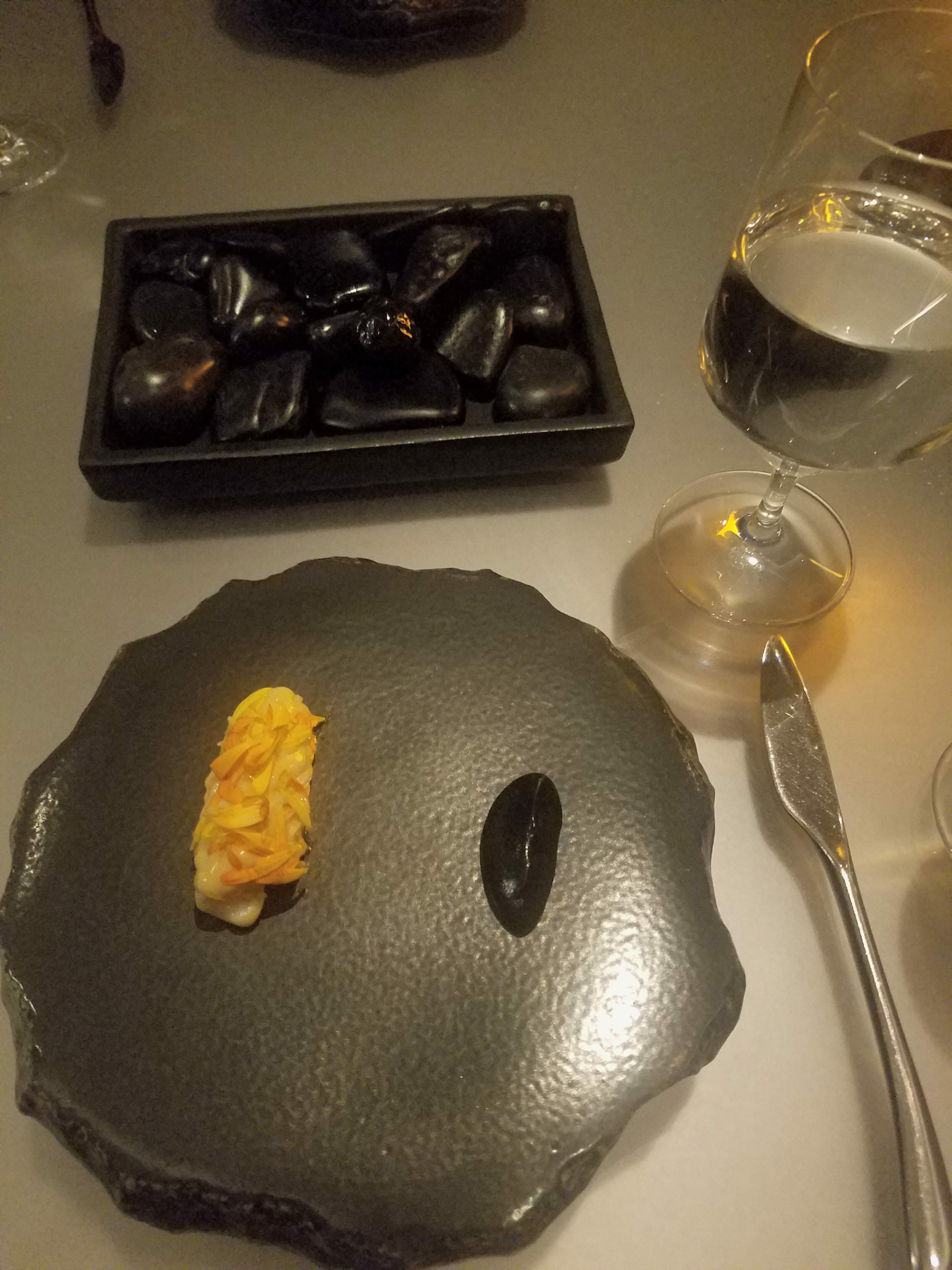 At this point they decided to smother the fire with Christmas trees and atop the branches the placed a small pastry-like bite. Mine was potato and something else while my friends got venison with cheese. 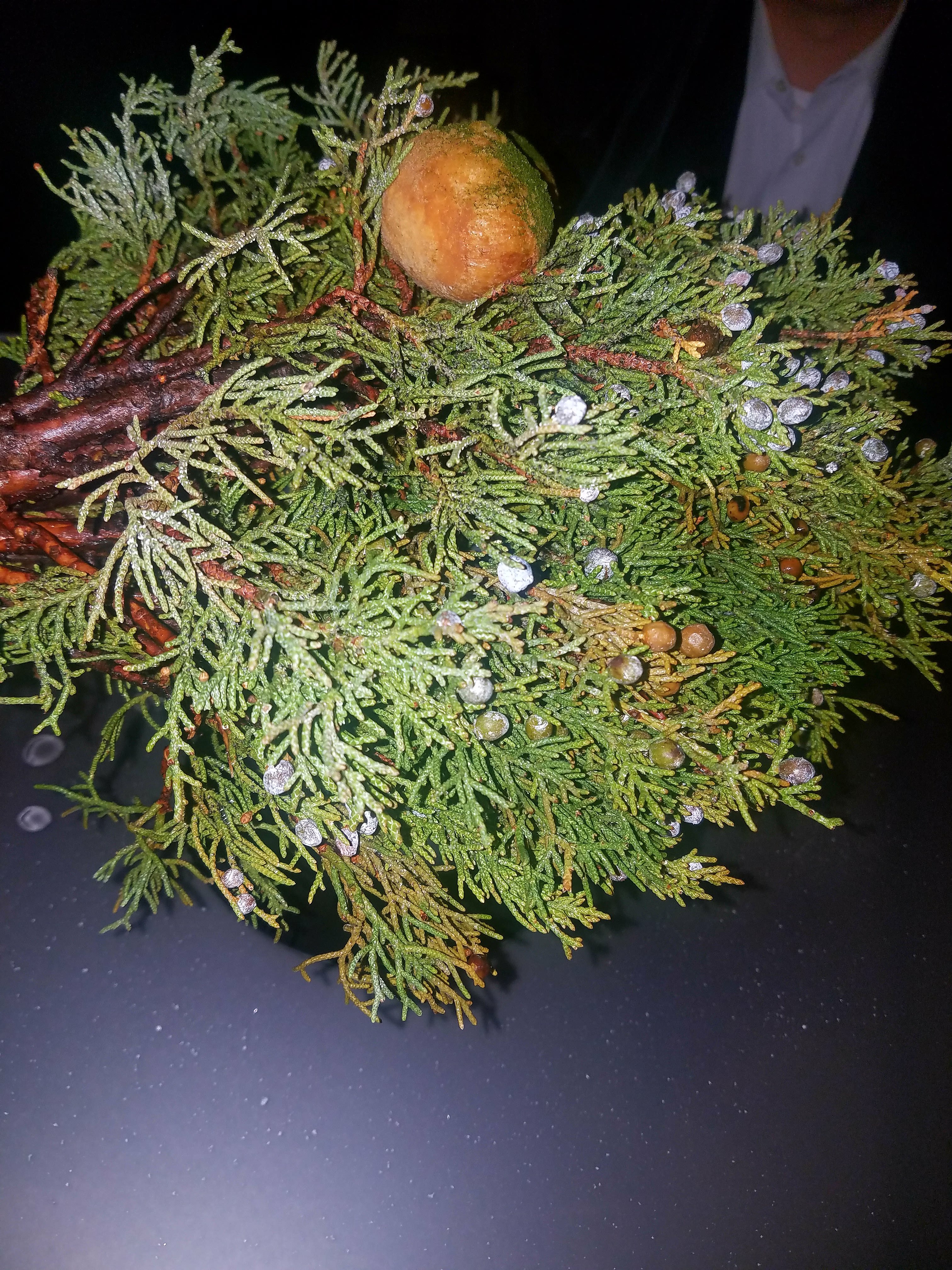 Along came a soup with a piece of orange paper which happens to be langoustine, the Norwegian prawn. We also each got 1 piece of crunchy nori. 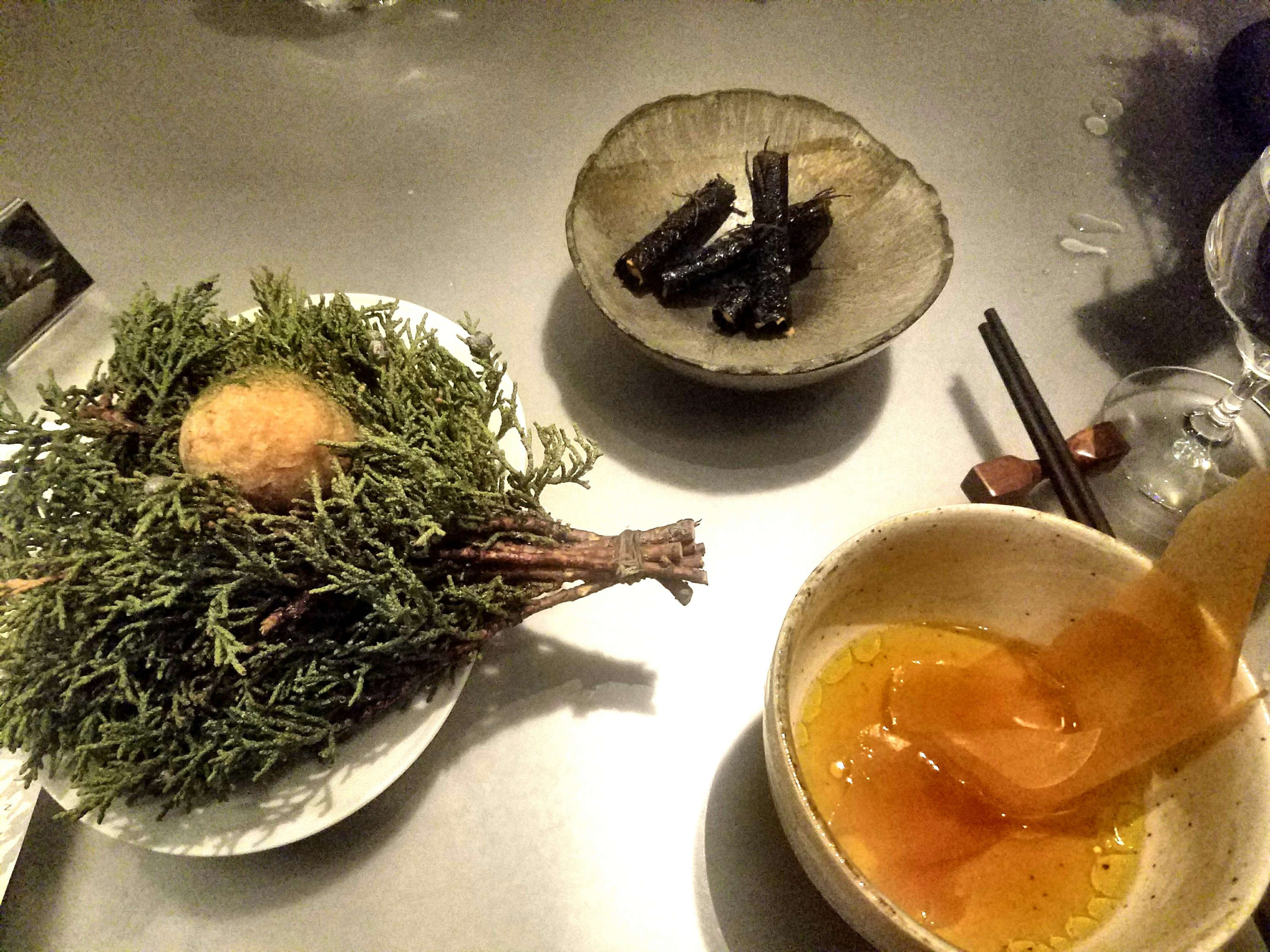 The broth had a very nice flavor and it was definitely a strong seafood aroma.

After completing that the waiter came up and pulled a potato from the centerpiece and mashed it up in front of us. He separated the 1 potato into 4 bowls which he proceeded to add a whipped clam chowder to. 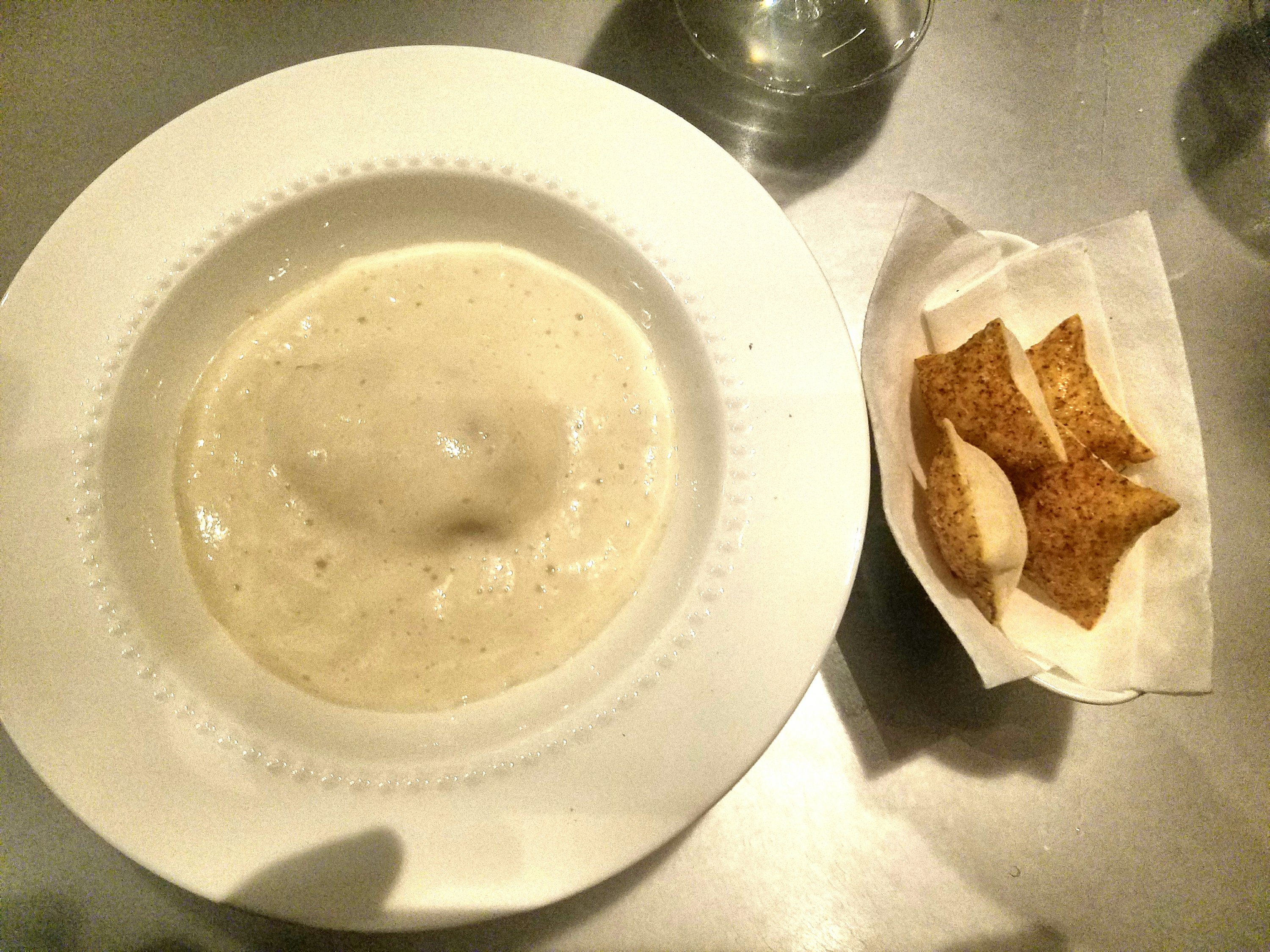 He sprinkled some lemony zest on my clam chowder and bacon on my friends’. The pillow-like thing next to the clam chowder is the oyster cracker made with some various spices. It was hard to keep track. When we finished we were lead into the kitchen for a cocktail and dessert-like pastry. My cocktail was a grape/yuzu flavor while others with alcohol had some cherry flavored liquid. There was a little show of their cocktail shaker and the rest of the bustling kitchen. It made me really want the kitchen tier in the future. 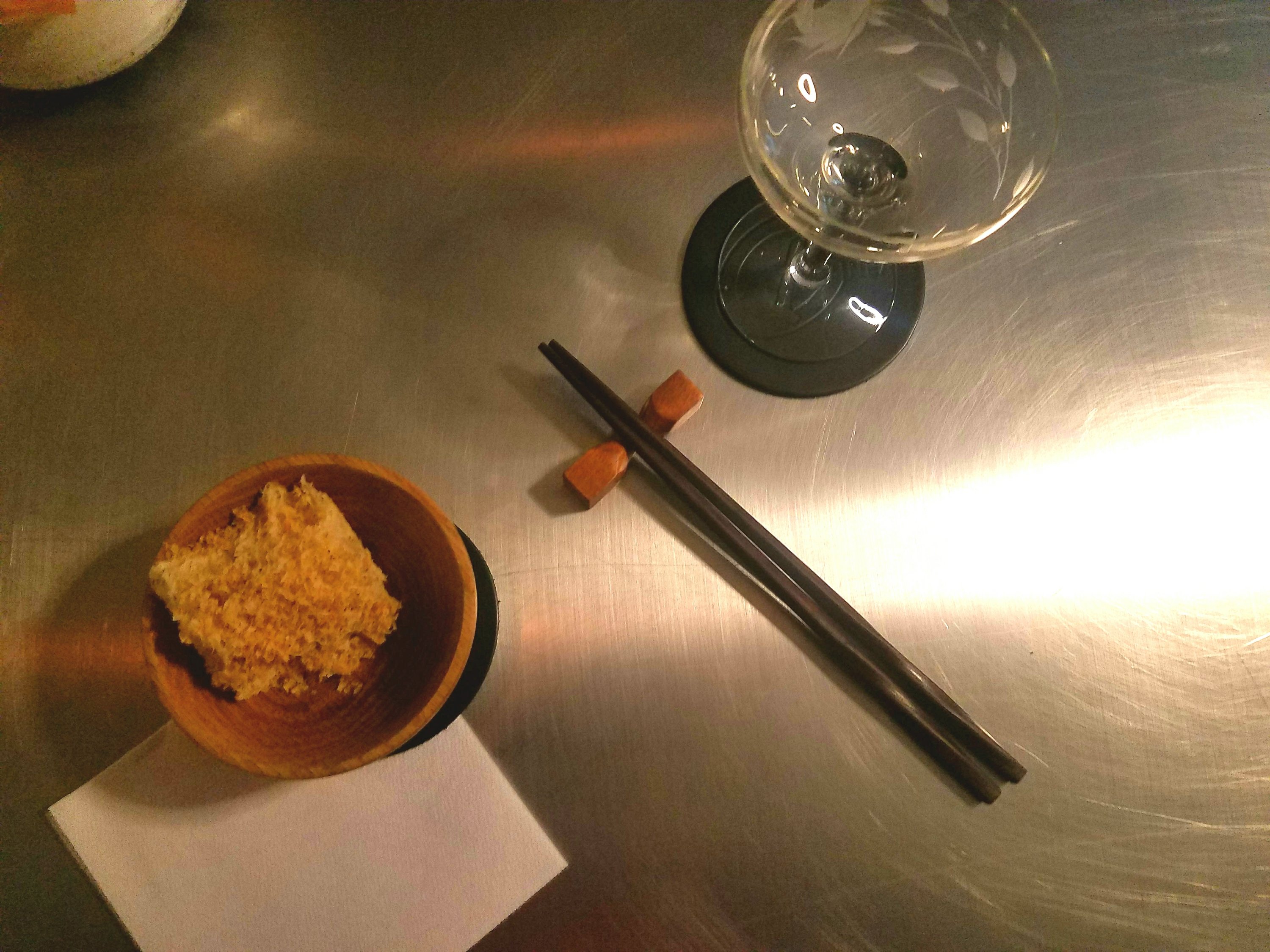 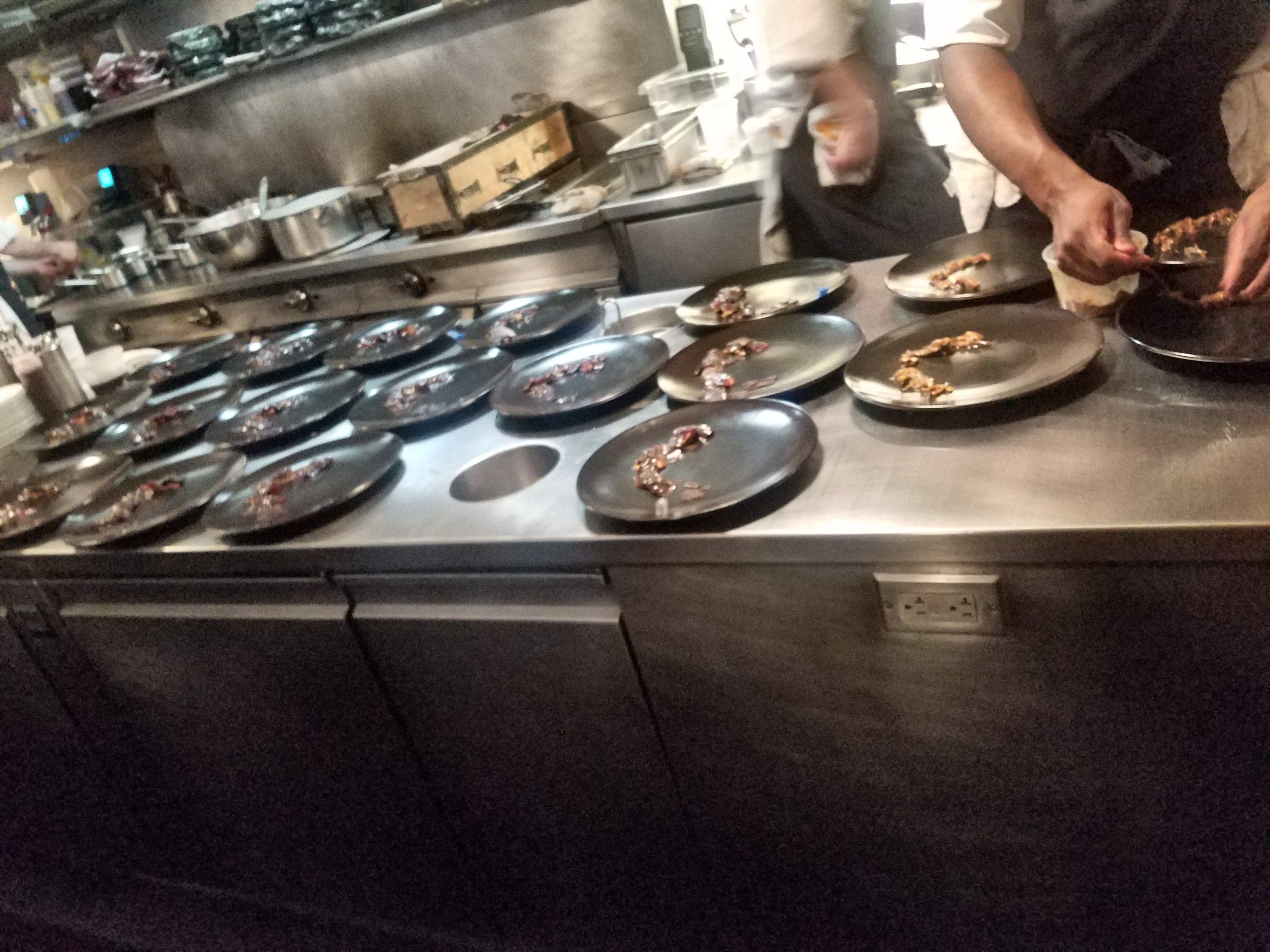 I was just so excited for what they had in store and we were just about half way. I felt bittersweet due to my excitement for the next dish but I also knew it was ending sooner than it was when I began.

Our next dish was a blueberry glazed mushroom which was probably one of my favorite dishes of the night. I loved the various flavors, textures and everything harmoniously nestled in my mouth. It was so many flavors sweet, savory, tart, creamy. It’s hard to explain without eating it. 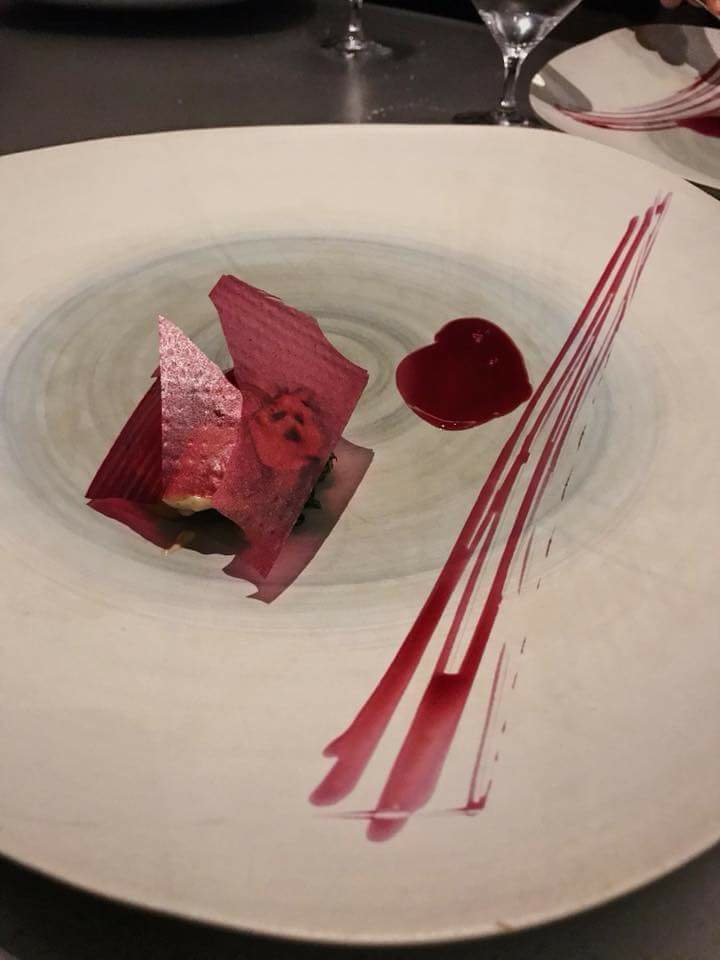 After that was another savory sort of dish mine was a fish while my friends got a quail. There was definitely a taste of Chinese bbq sauce with star anise notes in the sauce. It was paired with a bite on the side that I don’t remember too well what it was, but I remember that it was tart. The amusing aspect of this dish was the colorful charcoal on top of the fish, it gave the fish a smokey taste that I quite enjoyed. 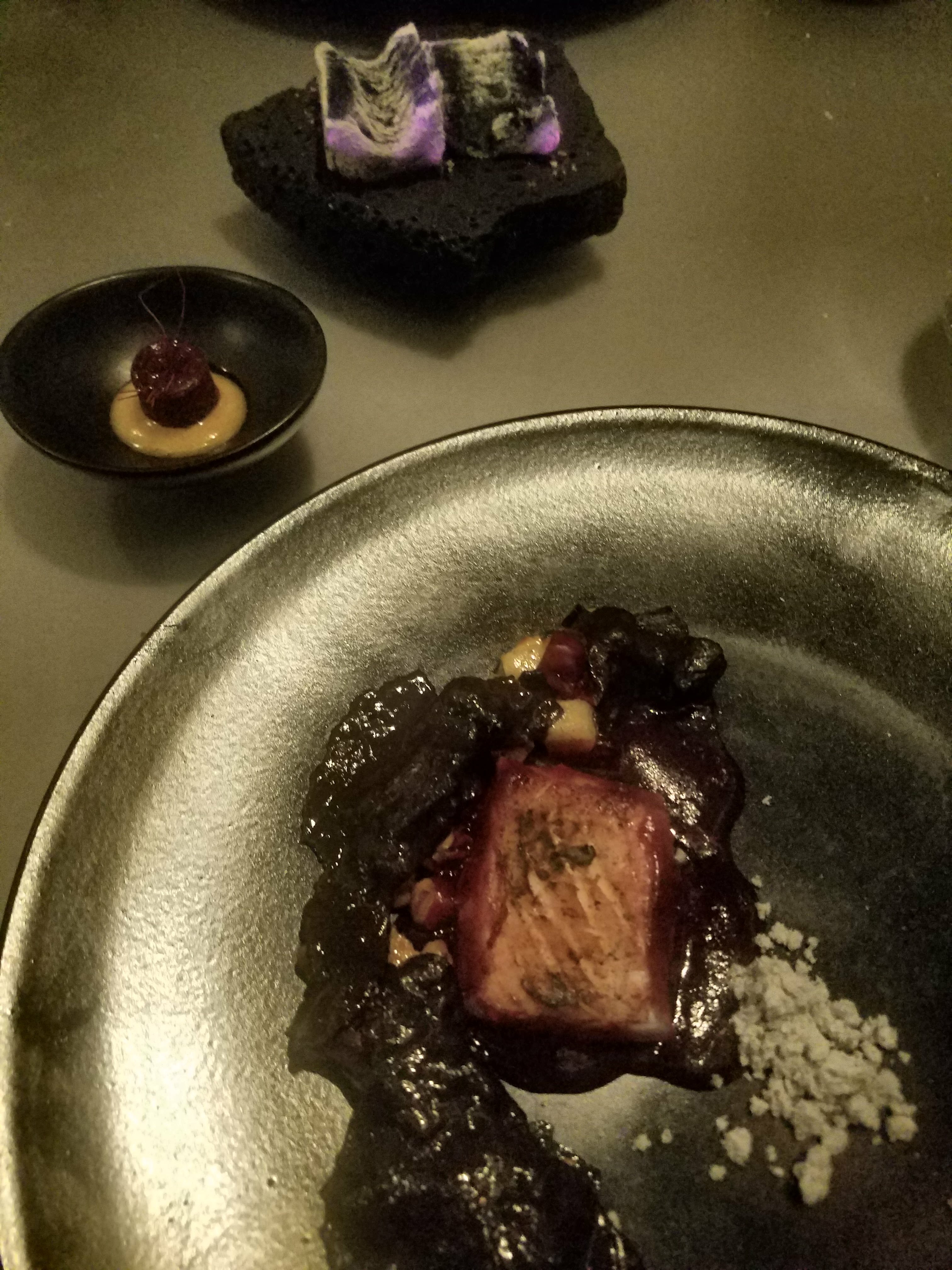 We were also given a jar that said vanilla on it with something that looked like a vanilla bean but was actually a soy sauce tasting parsnip. My meat eater friends got some jerky in their jar. Mine was interesting and had hints of vanilla but I was not a huge fan of the taste. It’s probably the only thing I disliked from the entire meal. 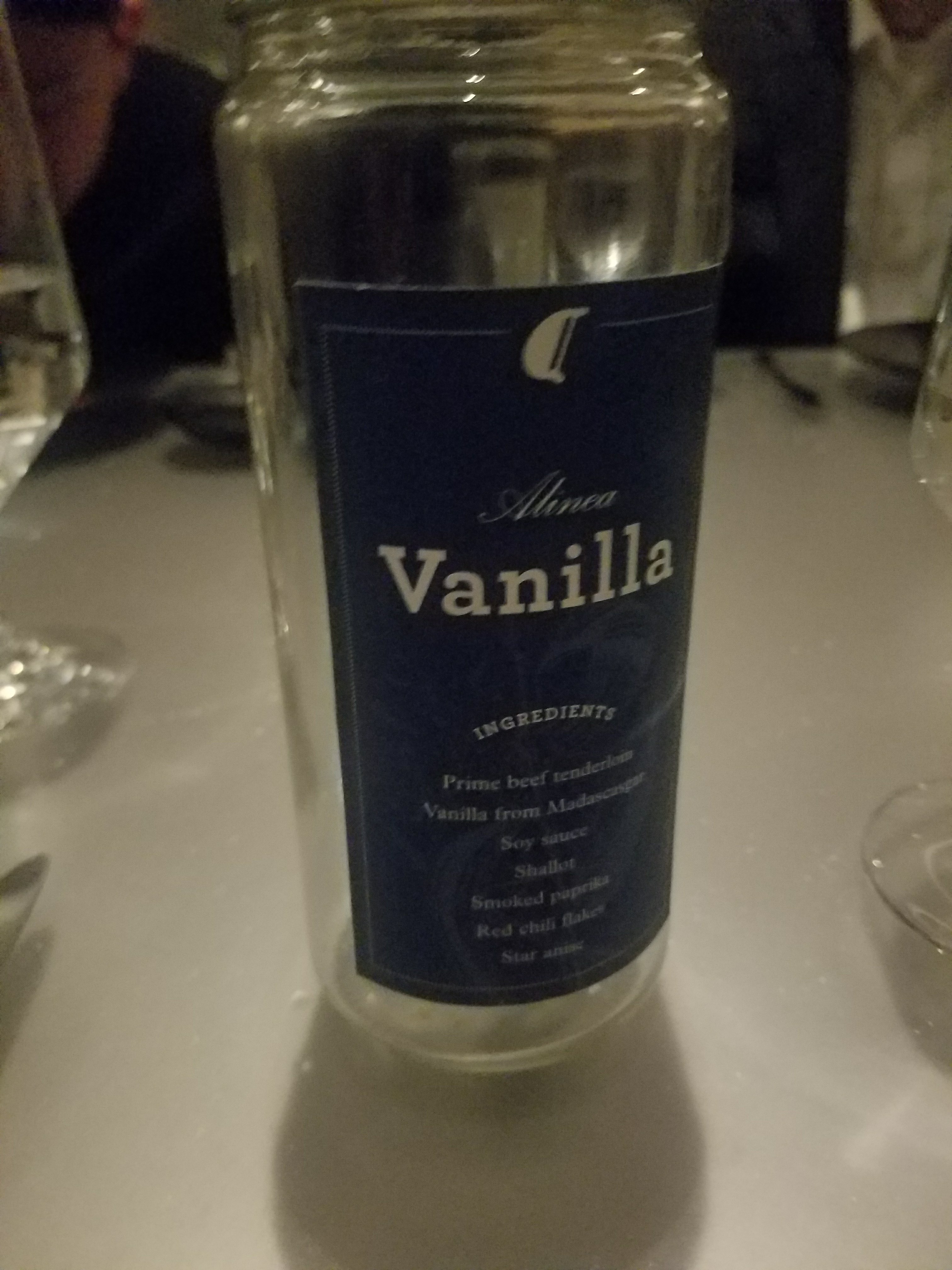 After that we were asked our choice of tea or coffee meaning that the meal was coming to the end and dessert was about to be served. That bittersweet feeling grew stronger. I got an herbal rosehip, peppermint and chamomile tea.

The first dessert that came around was this little white puff and a test tube. The white puff was olive oil for me and goat cheese for my friends. It tasted like one of those marshmallows from Lucky Charms that I used to have as a kid. The test tube had a dragon fruit on one end and a pineapple on the other. The liquid inside was a salty sweet mixture that complemented the pineapple well. I suggest eating the dragon fruit end first, or if you are a gelatin eater, eat that before the pineapple. My friend Mark had a better photo so I stole his. Check out his instagram for cool food pics here. 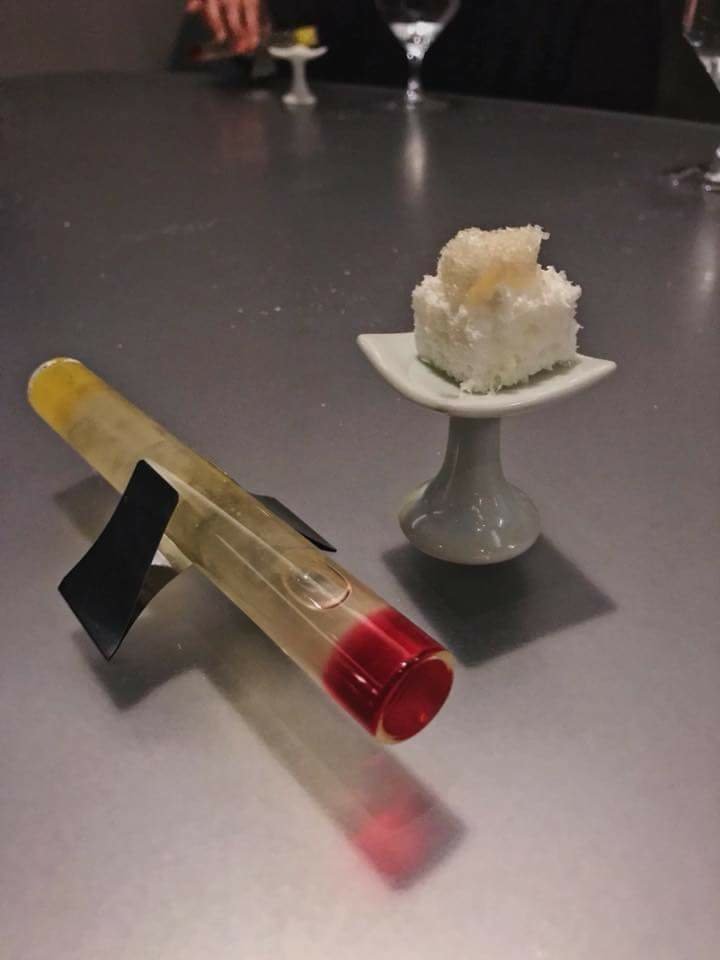 My favorite dessert of the night was this green tea, chocolate, snow and cherry blossom mish mash of ingredients. It was delicious and there was even a purple yam that tasted like a fluffy sweet cloud. If clouds could taste like something that would be it. 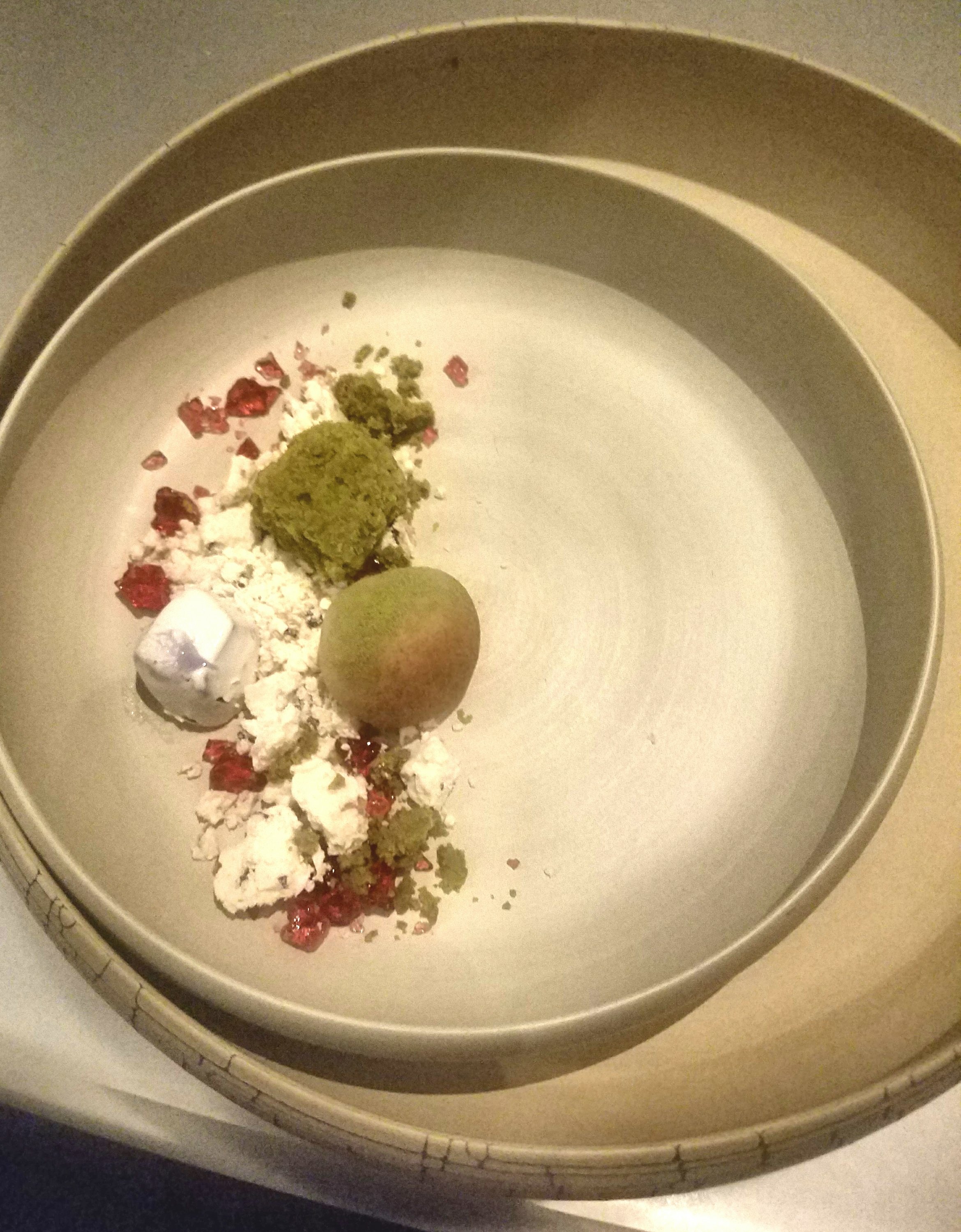 I got a special dessert after that, which tasted like bubble gum. This was definitely a nostalgic moment for me. The dessert was cold and sort of tasted like a deconstructed popsicle. It also had a little glass like piece that tasted like cherries. I needed to eat it quickly otherwise it would have melted. This was the gelatin free alternative to the campfire marshmallows my friends got. 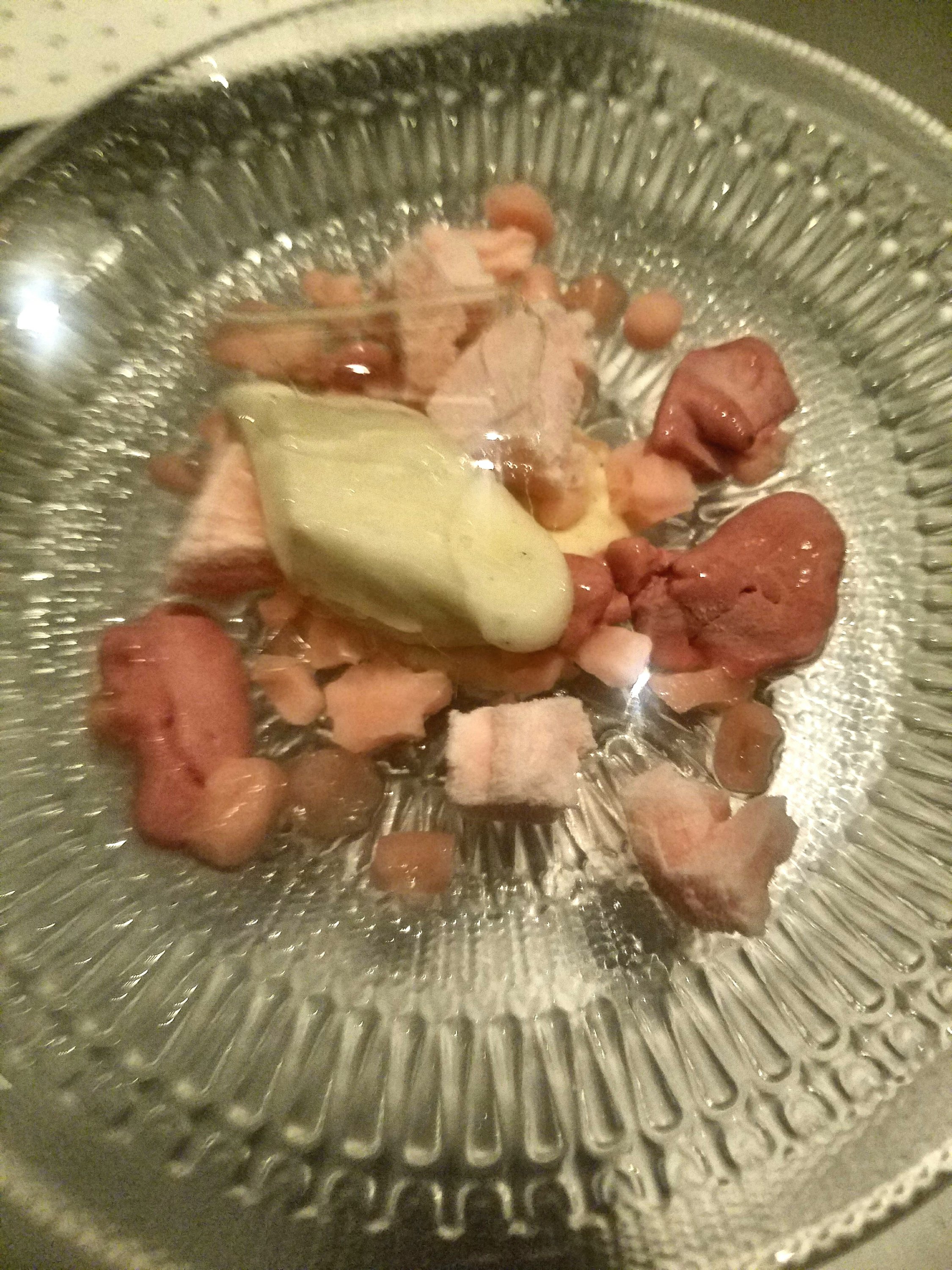 The last and most fun thing I had was a balloon actually filled with helium and it tasted like green apple. The entire balloon was edible and it was fun to eat. Definitely messy but worth it. 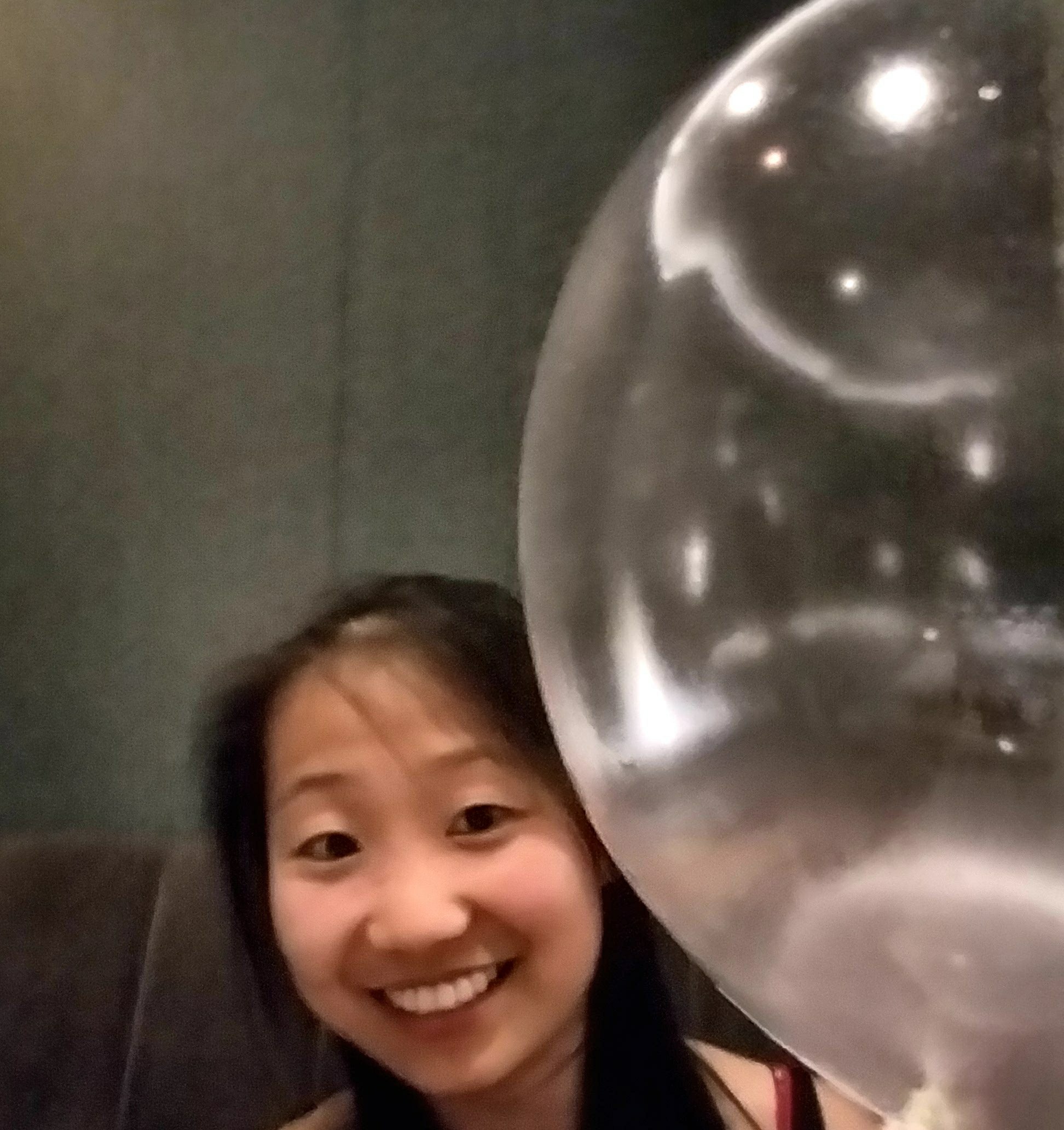 The end of the night was no end. It was the beginning of my new obsession with going to Michelin Star restaurants. I will have to save up tons of money but I hope to go again someday.

It’s also noteworthy that Justin Timberlake was literally in the next room over where the bathroom was. It was the coolest thing I have experienced this year so far… I mean besides getting into Medical School.

Restaurants like this are worth a trip and if you decide you want to make that trip it would be nice to save money on where you’re staying since you’ll be splurging on the food. Here’s my airbnb plug of the week or click here if you’ve never used it before to get $40 off your first trip. Have fun travelling and eating. I hope you enjoyed the read.